The five years of Battle Fantasia MUSH roleplay have established a miraculous and tragic timeline...

...but it wasn't the first timeline. 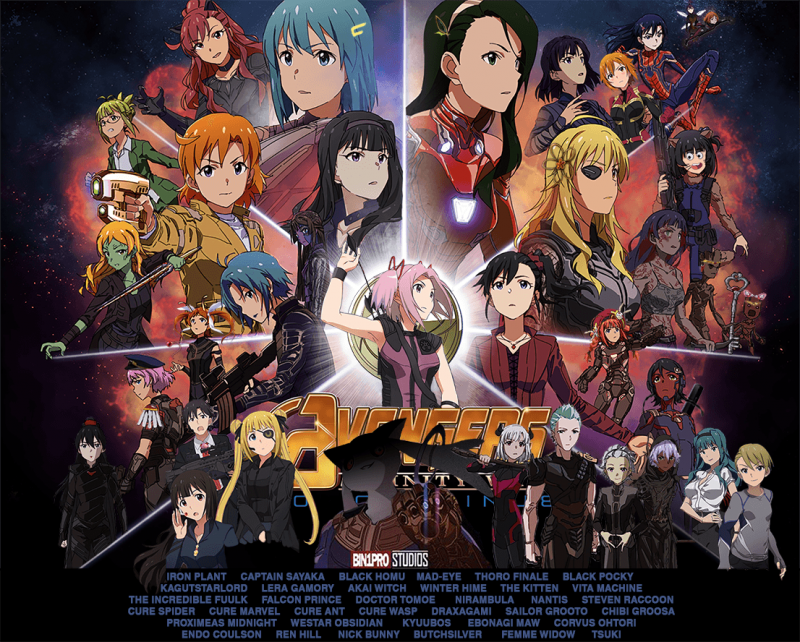 The height of fall. Tokyo is golden and beautiful, afternoons still warm with the memory of summer; beginning to be crisp, in the early morning, with the promise of winter.

It is the second year of the Sister Schools program, which is still new enough to be exciting and also a little uncomfortable. Juuban Public School is about to host the joint sports festival, brushing up their fields. Infinity Institute and Ohtori Academy anticipate shoddiness, but are going to find sportsmanship instead.

But some students suddenly find themselves having to balance the challenge of finding the right partner for the three-legged race with a new life -- a double life -- a secret life.

That's because two weeks ago the demonic army of Dark Fall swept into the heart of the magic worlds, the Fairy Realms, and dislodged their masters. They possessed ancient artifacts and used them to explode fairy castles, and they sealed fairy queens away in teacups. They shattered souls, and remade worlds in their own dark image. And so the cries for help went out -- all of them, drawn by an unseen force, to the same blue ball in Space.

And so it is that today, on Earth, the consequences of centuries, millennia, of planning and battles have come to fruit, as Dark Fall and Ends of the World alike descend not as one, but at once. The greedy fingers of corporate masters tear the dreams out of children's chests in the hunt for the miracle-granting Embryo. A coterie of Belkan Knights root in the shadows for the Linker Cores of the innocent - leaving them half dead and bereft of magic. Orphans stir on Southern Cross Island, finding victims to feed on, as their master's mark blazes in the sky. Underground, the Order of the Glittering Crux seeks to release the seals that will allow them to summon their magitechnological wonders into the real world, and seize it for their own. Witches throng in the shadows, their attention called by the despair of those who see how bleak the world is, their Kiss drawing still more into that trap. Above, the Castle Where Eternity Dwells silently waits to see whose heart will next be savaged by the Duels it oversees. And in the North, Queen Beryl's empire rises again, to finally and absolutely conquer the Earth and therefore the crown jewel of the universe...

But the guardians of Earth are rising. Tokyo is where that battle will be fought; as Pretty Cures are found by the refugees of the Fairy Worlds, and HiME once more flock to the Land of Fuuka, now called Southern Cross Island, and the Silver Millennium's Sailor Senshi stir at last from their millennia-long slumber. The darkness is deep; but once, a great queen wished for a light to outshine any darkness.

She will not be disappointed.

Welcome to 'PREVIOUSLY ON BATTLE FANTASIA', our game's next major plot. Starting immediately, we're taking a trip back in time to our world as it was in September 2013: a more innocent time, with more innocent characters. New transfer students are new once again. Virtually everyone is a freshly recruited magical girl, taking their first steps into the world of fighting evil by moonlight -- youma are scary and their masters mysterious and unknown. Balancing normal and magical life is not old hat but an often-overwhelming act of frantic rushing around and the occasional guilty lie.

And beautiful friendships are about to be born.

WHY ARE WE DOING THIS?

Frankly, the game has been in a very dark place for a very long time, and everyone needs a break. PREVIOUSLY ON BATTLE FANTASIA will occasionally tackle some heavy truths, but overwhelmingly its tone is intended to be lighthearted and fun -- or at least not oppressively, inescapably awful. It is an opportunity for everyone to get a fresh take on their characters, exploring, in a backwards way, exactly how far they've come.

It is also, frankly, an opportunity for some fan service, and the staff is taking requests on 'alternate timeline' plot points you'd like to see worked into the story. Please email your ideas to battlefantasiastaff@gmail.com or join the brainstorming shared document here!

IS EVERYTHING THE SAME?

No, and we will get into the differences between the first timeline and the final timeline (our regular game) below.

Obviously, one major difference is that themes and characters that joined the game after September 2013 will have joined it earlier and younger: take a look at your 'school' entries, you'll see you've been sent back two grades! (If you are one of these characters, the staff wants to work out the details of your earlier arrival with you -- please contact Pink Moon Stick for a brainstorming session!)

Characters from later SEASONS of certain themes who weren't around at game start (here's looking at you, Chibi-Usa-chan) will not be present in September 2013, but can rejoin us as the timeline catches back up with them.

Yes. We are going to do several, one at a time, and in so doing tell a story, as a game, about the MANY ways things have changed from everyone's original destiny to their current one (not just the hairstyle of Homura Akemi). In each timeline we will be skipping around through the intervening year and a half between past and present to hit various highlight events from the old days that some of our players missed out on, and others would enjoy revisiting.

If you want to remind yourself and come up with a possible wishlist, http://battlefantasia.pinksugarheartattack.net/Timeline is hideously out of date, but it's the earlier stuff we're especially eager to do, so in that sense it's still a useful resource!

That's completely fine. All 'Previously On' logs are going to be labeled as such; you are welcome to roleplay in the 'current' timeline privately if you like, especially to give yourself a little denouement after certain major events, if you don't want to wait. We stopped at the end of the IC night of May 27, 2015, and will be picking back up on May 28, 2015 eventually; for various spooky plot reasons, please keep your roleplay within the next two days, May 28-29, 2015.

For log titles, please label which timeline you're roleplaying in with the prefix: TIMELINE #:. So, a scene set in the first timeline might have the title TIMELINE 1: Welcome To Tokyo!

Each timeline has a game-wide theme designed to help guide the overarching plot of Previously On Battle Fantasia across timelines. There is also a list of differences from the 'final' timeline (regular BF) to help people keep things straight and create prompts for interesting scene opportunities.

Please add to the bullet point list beneath the current timeline to document significant differences as they appear. We will be adding later timelines to this page gradually, along with their notable changes from the previous timeline required to get the roleplay a'rolling.

THEME: FRIENDSHIP. Everyone is meeting each other for the very first time. Friendships are born, and they are beautiful. Over the course of the first timeline, the innocence and passion of the magical girl community will be powerful enough to forge a grand alliance, in some respects the opposite of the final timeline. A good opportunity for bitter enemies to become dear friends. That doesn’t mean there is no tension among magical girls, but rivalries tend to be less painful and more hopeful.

THEME: DREAMS. Homura's dream has come true -- and that makes it easier for everyone else to pursue theirs, because the life of a magical girl is a whole lot safer when they have an ally who can stop time to keep them from harm. It's mostly a good thing, but there's nothing like peril to inspire rapid bonding, so although the magical girl community is still (relatively) unified, it is slightly more loosely knit than it was in Timeline One. And with a little less magical stress in their lives, people are able to focus more on their individual goals rather than joint ones -- pursuing their different, unique, beautiful dreams.

THEME: TRUST. As in its complexities, its limitations, and its breakdown. Up until now, being a magical girl has included automatic membership in a sort of collective sisterhood -- the world has been divided into 'the magical girls' and 'the bad guys'. But a simple question changes everything: 'What if the fairy mascots and other sources of power don't actually have the magical girls' best interests at heart?' It's an unbelievable idea, but simply rejecting it means that, for some reason, Homura Akemi is trying to drive a wedge between magical girls and their mascots. In other words: not all magical girls can be trusted. Once planted, this seed of uncertainty can only continue to flower, and has done so spectacularly.

In the first three timelines we explored friendship and dreams and trust.

But there are so many more timelines, in between the fourth and the last.

To explore them, we're writing cutscenes and small vignettes -- to capture unique moments on the nigh-endless spectrum of timelines; to tell stories of these alternate universes that you won't have the chance to tell back in the main one; to explore the ways in which your characters are the same across each timeline, from the most unified to the most fractious -- and the ways in which they are different.