Duck is a duck. Duck is also a girl, named Duck! And the girl named Duck can turn into a Magical Girl named Princess Tutu, a tragic story-book character who is fated to turn into a speck of light and vanish when she confesses her love for her Prince. Princess Tutu is an elegant and empathic prima donna ballerina who helps others come to terms with their true feelings, and whose mission is to restore the Prince's shattered heart. Meanwhile, Duck is a clumsy weirdo, who spends her days fumbling her way through Infinity Institute's ballet program and pining over Senior Mytho -- who just happens to be the modern-day Prince. Scatterbrained, trusting and extremely impulsive, Duck truly desires to help others. Unfortunately, whenever she betrays her nature as a duck -- usually by quacking -- Duck turns back into a simple duckling!

Once upon a time, there was a man who died.

He was a writer of tragic tales, none more tragic than the one which was interrupted by his death.

In this story, there was a minor character. No one wanted to be her, because she had a tragic fate: to confess her love to the Prince, turn into a speck of light, and vanish! To make matters worse, this inconsequential character appeared for only a few lines.

Her name was 'Princess Tutu'.

No one wanted to be her, so he thrust the role onto a simple duck who loved the Prince...

Senior Mytho: A prince Duck met when he was dancing by her lake, whose lonely eyes made her wish that she could dance with him. Mytho's needs have driven Duck's actions, from becoming a girl to becoming Princess Tutu -- she truly wishes to bring a smile to his face once more.

Senior Fakir: Duck sees him as a creepy, overbearing guy who pushes Mytho around. She doesn't like him, and doesn't even suspect that what he's doing is for Mytho's own good.

Miss Rue: She's graceful and gracious -- qualities which Duck doesn't see in herself at all. Although she thinks of Rue as above her in a lot of ways, Duck doesn't feel badly about it, and she's not intimidated by the advanced class student's popularity. She doesn't know Rue very well, but she's sure they could be friends!

Miss Tsuru: She's just like a noblewoman, isn't she? The fact that Tsuru is engaged to marry at her age doesn't strike Duck as odd, because Duck is actually a duck, and so she doesn't get to think that other people are odd, because being a duck is about as odd as it gets. She hopes that Tsuru will make lots of friends here, though!

Mister Cat: Is a cat?! Still, as a duck, Duck can't really point fingers. Mister Cat is a good teacher, but he's awfully preoccupied with finding a wife, isn't he? If only she'd stop spacing out and making herself seem like a good prospect...

Miss Edel: She's really smart, and wise, too! But how does she always manage to disappear whenever Duck turns away? She must be quick, too. Wow, Miss Edel is incredible!!

Pike: One of Duck's dorm-room friends! She really likes dancing and gossiping, and she always knows so much about Gold Crown Town. Probably because she isn't a duck who just turns into a girl, huh?

Lilie: Duck's other dorm-room buddy. Like Pike, she knows a lot about town. Sometimes she's a little too... um... energetic when it comes to misfortune, but that's just how she is. She doesn't mean any harm by it, right?

Duck eats bread because Duck is a fairytale duck. Please do not feed actual ducks bread! It is not actually good for them. 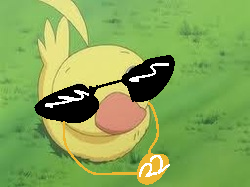 Sometimes she moonlights as DJ-22, dropping the fowlest beats you've ever heard.