Nadeshiko Fujisaki is the Queen's Chair of the Guardians of Ohtori Academy, the elementary-school level student council. Heir to the Fujisaki school of Japanese dance, she is a talented actress who rarely shows emotions that aren't a sweet-hearted smile...until her Guardian Character Temari fires off a Chara Change, turning her into a screaming, sharp-tongued gangster! As a Guardian, Nadeshiko has responsibility for protecting the happiness, safety, and security of Ohtori Elementary students, a responsibility she occasionally decides to exercise over older students. That includes sometimes even throwing herself into the fray to protect their hearts from supernatural predators!

Nadeshiko is 11! She has nothing particularly special in her history. She has worked hard her whole life to become a true and proper successor to the Fujisaki school of Japanese dance, which she takes with a lethal seriousness.

Nadeshiko has a definite disinterest in the petty intrigues of the upper-level Ohtori student council and student body. She is far from a studiously honest individual, she certainly has her share of secrets to keep, but she has no patience for lies made to hurt people. She has absolutely no mercy in blowing holes in others' malicious deceits when she sees them. The older Ohtori girls hate her to bits, but she's immune to much of their arsenal, between her refusal to play their power games and her Guardian status. 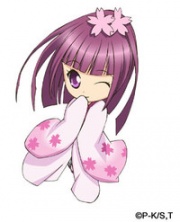