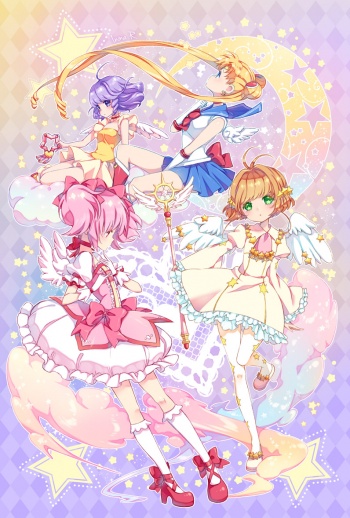 Illustration by permission of Inma

The Battle Fantasia combat system is designed to resolve and provide flavor to (violent) conflict on our game in a fun, tactically interesting way that embraces the hallmarks of the Magical Girl genre (such as transformations, dramatic sacrifices to save an ally, stock footage-esque Finishing Attacks and the importance of Morale). It’s a tool to help tell stories; it isn’t mandatory, if everyone in the scene would rather simply use consent.

Characters start at 100 Fatigue, 100 Mana and 0 Morale. Any of these values can be attacked directly, but it’s Fatigue that’s usually lost to attacks, while Mana is spent on invoking attacks and counterattacks, and Morale increases automatically each round, but more quickly in rounds that a character successfully damages an opponent (this automatic increase can be offset or reversed entirely by attacks that damage Morale). If Fatigue reaches 0, a character is too tired to keep fighting. If Mana reaches 0, a character lacks the energy to retain their transformation and becomes a normal person and is unable to keep fighting. If Morale reaches -100 (it can also range as high as +100), a character has lost the will to keep fighting. (For more information, please see: Battle)

When attacked, a character has a number of reaction options. Dodge is high-risk but also high-reward, while Brace is the opposite; Counter is mana-intensive but very effective at mitigating damage if a character spends about as much mana on their counterattack as their opponent did on the initial attack, with a solid chance of doing damage to the original attacker, as well. Characters can specialize in being better at one or more reactions, but every time one uses a reaction successfully, they incur a stacking Reaction Penalty that lowers the odds of successfully using that reaction again, which declines each time an alternative reaction is used; this incentivizes the use of multiple reactions over the course of the fight.

Attacks are designed in advance (except for Free Attacks, which are improvisational) by splitting Attack Points between, essentially, base damage potential and 'flags' which customize the attack in further detail, and permanently occupy a character’s attack list for a given transformation. They can be tailored to instantaneously punish any of these reaction options with a flag like Homing (which is difficult to Dodge), or can have a chance to apply a debuff that punishes a reaction over multiple rounds (such as Trap, which makes it very difficult to Dodge for the next two rounds). Attacks can have a higher chance to critical hit at the expense of lower base damage, or vice versa. There are many other flags with a variety of tactical functions.

Combat usually ends when someone has sufficiently high or sufficiently low Morale (and, simultaneously, the Mana required to pay) to activate one of their Finishing Attacks, or Finishers. Finishers are tremendously powerful attacks, but watch out! If a character fails to finish off their opponent with a Finisher, their opponent automatically satisfies the Morale requirement for their own Finishers on their next action. Furthermore, when a Finishing Attack is used to counter a Finishing Attack, it initiates a dramatic mana bidding game called a BEAMWAR!

Characters design each of their transformations separately, using a pool of Character Points for each form defined by their Master Rank. Points can be spent on stats (Might, which increases damage; Vitality, which improves the Brace reaction against Physical attacks, and resists debuffs from Physical attacks; Spirit, as Vitality but for Magical attacks; Reflex, which improves the Dodge reaction), henshin abilities that passively improve or actively create various tactical options, and extra Special and Finisher attack slots. Character Points gradually accrue over time, allowing characters to grow more powerful and eventually, through great hardship, advance in Master Rank.

Battle FAQ - Midfight and not sure what to do? Check here!

Chargen - Here you will find the guidelines for making a character in the combat system on Battle Fantasia, including descriptions of Ranks, Stats, Abilities, and Attacks.

Battle - Here you will find explanations of the three resource bars, Fatigue, Mana and Morale, as well as further discussion of the various Reactions through which one defends from attack.

Commands - Here you will find descriptions of the commands used within the MUSH to conduct battle.

Advancement - Here you will find the rules for representing a character's growth in the combat system over the course of their story.

Examples - Here you will find examples to walk you through both character generation and combat.

Glossary - A reference for the game's admittedly extensive vocabulary.

Combat System: Index - A master list of all pages.